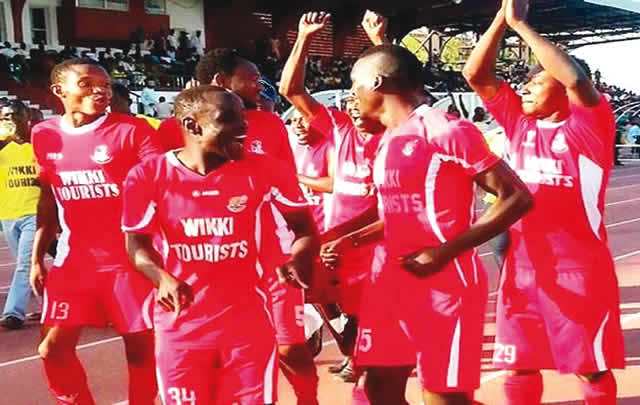 Nigeria Professional Football League side, Wikki Tourists, say their players and officials were not abandoned by the club’s management on Tuesday, on their way to Uyo, Akwa Ibom State to honour their NPFL Match Day 2 against Dakkada FC on Wednesday.

Reports emerged on Wednesday that players and officials of the Giant Elephant, as they are fondly called, spent the night on the road in Oturkpo, Benue State, after their team bus broke down and efforts to repair it proved abortive.

When our correspondent contacted the media officer of the club, Abdullahi Kobi, he denied the claims.

“It is true that we had a problem with our vehicle but the issue of passing the night on the road isn’t true,” he told The PUNCH.

“There was no way we could have passed the night on the road because the incident happened very close to the security checkpoint and it was a minor breakdown of the vehicle because of the bad nature of the road. Before we embarked on any journey, we make sure that our vehicles are properly serviced, but this thing happened and when it did, we were not under any threat because security officials were there.

“The chairman of the club also ensured that we got back on the road, he was able to hire two buses to take us to Uyo and about 30 minutes later our own bus arrived.”

Kobi however expressed disappointment over claims that the players were abandoned.

“There is part of the report that hurts us that a call was put across to the chairman and that nothing was done. Such journalism was unprofessional because nobody called us to verify, the call from The PUNCH is the first that we have received to verify the situation. No one else did, instead, they all went to social media that we slept on the road, which wasn’t true. It is sad that there is no control over social media but we want to clarify that the safety of the players is paramount and there was no truth in the reports that they slept in the middle of the road.”

Wikki Tourists lost 0-2 at home to Niger Tornadoes in their first NPFL match last Sunday before playing a 3-1 draw with Dakkada away from home on Wednesday.

It is not the first time that players from the league have had horrible experiences while travelling by road for away games, reasons some fans slammed NPFL clubs over the poor treatment of the players.

Speaking with The PUNCH, Satli John said, “How long does this need to continue to happen to our players, it is sad that players were made to go through this hardship all because they want to play football. I may be wrong but I don’t think I have seen or heard something like this happen to players of other clubs on the continent.”

Alex Ebhodaghe stated, “This is not the first time that we have heard things like this happen but nothing has been done and maybe it is high time that the people in charge of the league begin to sanction clubs, starting with Wikki.”

“What’s tourism without the night experience, it’s to make their experience complete. Wikki Tourist no be by mouth,” Tope Niyi mockingly said.