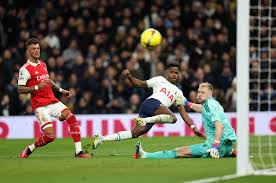 Arsenal completed the league double over Tottenham with a resounding 2-0 win.

A first half howler from Hugo Lloris and a Martin Odegaard wonder strike sealed the win.

Mikel Arteta named an unchanged side from the one that drew 0-0 at Newcastle as the Gunners looked to do the league double over their bitter rivals.

It was a scintillating first half from the Gunners as they were on a different level to Spurs.

The dominance was rewarded early after a Hugo Lloris howler allowed Bukayo Saka’s shot to find its way into the net.

Arsenal continued to dominate proceedings as Martin Odegaard doubled his side’s lead in the first half with a superb long-range goal as the Gunners obliterated Spurs on their home deck.

Spurs looked the better side early in the second half but couldn’t find a way through a stout Arsenal defense.

Arsenal saw out the game as they notched a comfortable 2-0 win and moved eight points clear at the summit of the Premier League.