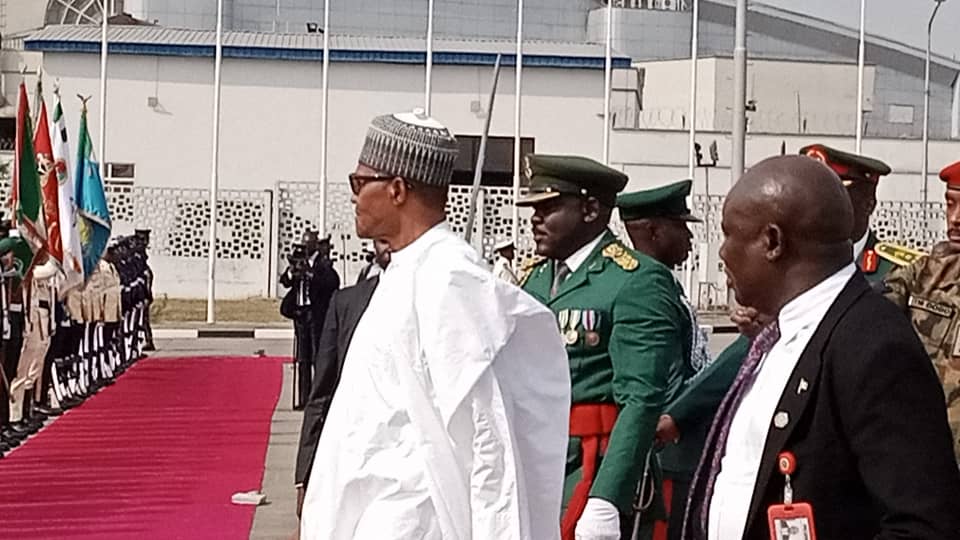 The President who arrived at the venue in an helicopter alongside the Governor of the State, Mr Babajide Sanwo-Olu cut the ceremonial  tape at the Port at 4:42pm

Prior to the arrival of the President, the Lagos State Commissioner for Commerce, Industry, and Cooperatives, Mrs. Lola Akande had in a speech, pointed out that the Deep Sea Port would complement others in the Country and expressed optimism that the port would further deepen Lagos position as an investment hub in Nigeria.

In a goodwill message, the Managing Director of the Nigerian Ports Authority, NPA, Mr. Mohammed Bello-Koko said the agency had purchased the necessary equipment for monitoring and regulation at the Ports and some neighbouring Countries had indicated interest in making use of the Port.

He said “we believe that the cost of doing business at this Port will actually be cheaper, it will be more efficient and it has become a model for upcoming ports”

Dignitaries at the event included the Minister of Transportation, Muazu Sambo, his Information and Culture counterpart, Alhaji Lai Mohammed, heads of government agencies in the transportation sector many traditional rulers in the Lekki Community, top businessmen and others.

The President who did not speak throughout the event was accompanied by Governor Babajide Sanwo-Olu to unveil and inspect the facility alongside some top government functionaries, traditional rulers and other stakeholders.

Earlier, the Lagos Commissioner for Agriculture, Ms Abisola Olusanya noted that with the production of rice from the mill tagged “EKO RICE”, availability of the produce would be guaranteed all year round.

Olusanya said “More importantly, the prestige that comes with owning a facility of this magnitude in Lagos, the smallest State in Nigeria, yet the largest rice mill in Africa, third largest in the world, it is disrupting, it pioneering, it is game changing”

Some of the Royal Fathers at the event, the Ranodu of Imota, Oba Mudashiru Bakare-Agoro and the Oniru of Iruland, Oba Gbolahan Lawal appreciated the efforts of the Sanwo-Olu administration in ensuring the successful completion of the project which according to them would bring prosperity to the state.

They also hailed the Federal government for encouraging local production of rice.

The rice mill, biggest in Africa and fourth largest in the world has two Warehouses, sixteen silos, and is sited on a twenty -two hectares of land in Imota with modern facilities  and is expected to  generate two hundred and fifty thousand direct and indirect jobs and ensure food security in the state and beyond.