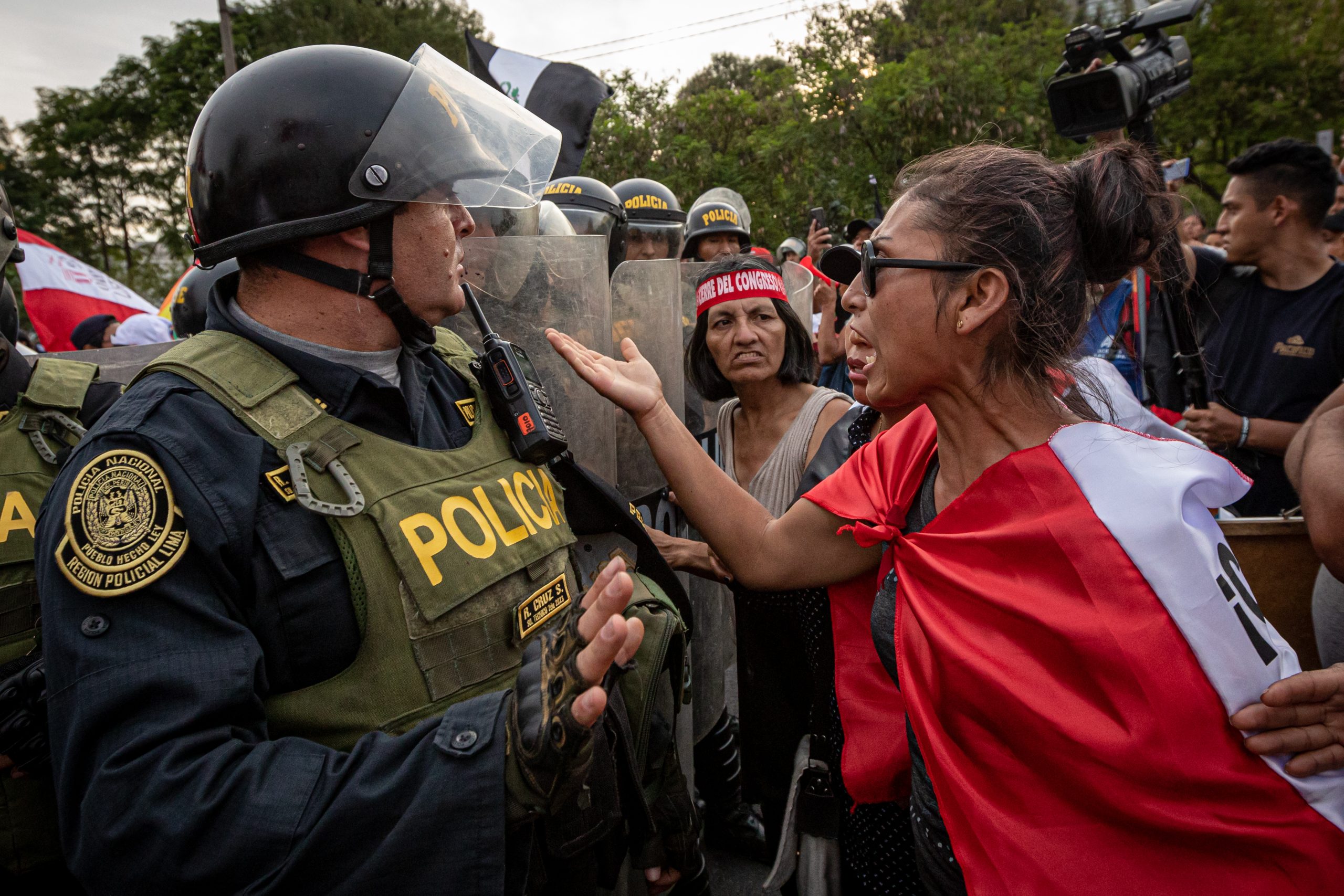 This story originally appeared in Peoples Dispatch on Jan. 17, 2023. It is shared here under a Creative Commons Attribution-ShareAlike 4.0 (CC BY-SA) license.

Thousands of people from Peru’s North, Central, South, and East regions have departed their homes in caravans headed towards the capital, Lima, to intensify protests against the coup and to call for de facto president Dina Boluarte’s resignation. The delegations composed of peasant, Indigenous, social, and trade union organizations are en route to Lima as part of the second ‘Marcha de los Cuatro Suyos’ or ‘March from the Four Corners’ to bring the voices of Peru’s marginalized communities to the capital.

The march was announced on January 10 by Indigenous and peasant leaders and already several groups of protesters have reached the capital. Meanwhile, thousands of members of the Aymara and Quechua Indigenous communities, as well as members of various social organizations and trade unions, departed in caravans from different provinces to Lima on January 16.

The first massive ‘March from the Four Corners’ was organized in July 2000, against the fraudulent re-election of Alberto Fujimori. In July 2000, thousands of Peruvians traveled to Lima from the four corners of the country and protested for three days demanding Fujimori’s resignation.

Regional presidents of the Single National Union of Urban and Peasant Patrols Movement (Central Única Nacional de Rondas Campesinas – CUNARC) reported that hundreds of thousands of their members from the long-neglected countryside of Peru, who feel represented by Castillo, were coming to Lima. Many said that they would stay in Lima and  continue peaceful demonstrations until Boluarte resigned. The peasant movement has called for nationwide protests for January 19.

On January 14, the government of Dina Bolarte announced that it was declaring a state of emergency for 30 days in the departments of Lima, Puno and Cusco, as well as in the Callao, Andahuaylas, Tambopata, Tahuamanu and Mariscal Nieto provinces and the Torata district. These are the areas where massive anti-government protests have been taking place since January 4, following the resumption of an indefinite national strike after the New Year break.

The state of emergency permits the suspension of certain constitutional rights and has seen an increase in the militarization of the territories which have seen large mobilizations. Several caravans have already been stopped by Peruvian security forces, and some arrests have already been registered.

On Sunday, January 15, on the first day of the 30-day-long state of emergency, Indigenous and peasant communities along with members of various popular movements, social organizations and trade unions hit the streets and blocked over 120 roads and 20 highways in at least 10 regions of Peru. According to reports from local media, Cusco and Puno were the regions with the greatest number of blockades. The Pan-American South, the Pan-American North, the Central highway, the Apurímac-Cusco-Arequipa Road Corridor, and the South Interoceanic Road Corridor were also among the major highways blocked by protesters.

The protest actions were organized as a part of ongoing nationwide protests demanding the release of former President Castillo, the immediate resignation of de-facto President Boluarte, the dissolution of the right-wing dominated unicameral Congress, fresh general elections, and the establishment of a Constituent Assembly to change the country’s 1993 Constitution, which was written and imposed under the far-right dictatorship of Alberto Fujimori (July 1990–November 2000).

Meanwhile, in the capital Lima, hundreds of citizens held a massive march from Lince district to Miraflores district to pay homage to the fatal victims of the state repression of anti-coup protests in recent days, condemning the Boluarte government for the unleashing brutal repression and demanding her unconditional resignation.

According to various human rights organizations, in the over a month of protests, at least 50 protesters have died as a result of brutal repression by public security forces. In addition, at least 450 people have been severely injured, hundreds have been arbitrarily arrested, dozens of social leaders have had their homes searched and/or received death threats.

Nevertheless, the Boluarte government continued to respond to the demonstrations with violent police and military repression. Incidents of strong repression were registered in various cities on Sunday.

The Boluarte government has been widely unpopular since its inauguration. According to a recent survey conducted by the Institute of Peruvian Studies (IEP), 71% of Peruvians disapprove of the Boluarte regime. Additionally, 88% of citizens reject the work of the right-wing opposition majority Congress. Similarly, 60% of people consider that Castillo should be released, and 58% consider that the security forces have been using excessive force in repressing social protests. Likewise, 69% are in favor of convening a Constituent Assembly to replace the current Constitution.

The president of the CUNARC, Santos Saavedra Vázquez, in an interview with Tiempo Argentino, explained why Dina Boluarte, who also came from a popular sector, had been rejected by the people who elected her alongside Castillo.

“Dina Boluarte was part of the presidential ticket along with President Castillo. They won together. However, the long coup plan of the right did not work. So they needed to destroy him from the inside and some of the actors who were close to the president, win them over and wait for the right moment. And Mrs. Boluarte did it: she sold herself early. She went to the other side clandestinely, of course, and from there the losing party in the elections (Fuerza Popular, led by Keiko Fujimori) offered her all its apparatus of criminalization and the experience of murder and dictatorship that Peru experienced in the 1990s, a plan that they are applying now. She totally sold herself to her adversary, leaving aside her principles, her loyalty to her project, to the very people that made her win. That’s why the people don’t believe her. She does what Parliament tells her, what the press tells her, what this mafia group that we have in the institutions tells her. She has radically crossed over to the other side. The right has always had that habit in our country: they lose the elections but end up governing,” said Saavedra Vázquez.

It is worth noting that immediately after taking office, Castillo’s Vice-President, Boluarte, entered into a political alliance with the right-wing to govern and formed a “government of unity” with them.

Saavedra Vázquez added that with the ongoing protests, Peruvians hope to achieve Boluarte’ resignation, Congress’ closure, and a transitional government that calls for elections this year, not next year.

“People, who had been silent, have come to agree with us because the country can no longer bear bloodshed and killings on a whim of the de-facto president and Congress. They are threatening to stay but we don’t know how long they will last because the people will respond with everything. The next few days will be very forceful, overcoming fear and everything that is happening, the people will resist,” said the president of the CUNARC.

One year of Repsol oil spill

January 15 also marked one year since the massive spill of 12,000 barrels of crude oil in the Ventanilla sea by Spanish transnational company Repsol, which is considered one of the largest oil environmental disasters in Peru. The devastating oil spill polluted over 1.7 million square meters of soil and 1.2 million square meters of ocean, tarred 21 beaches in four municipalities on Peru’s Pacific coast, and killed a vast variety of marine wildlife, besides incurring huge economic losses to fishing and tourism industries.

According to the Peruvian Ombudsman’s Office, twelve months after the spill, Repsol still has to complete the cleanup of the affected areas and compensate those affected. The Ombudsman’s Office pointed out that in October 2022, when the declaration of environmental emergency expired, the Agency for Environmental Assessment and Enforcement (OEFA) determined that 71 of the 97 sites impacted by the spill continued to be affected by hydrocarbons.  Additionally, it noted that more than 10,000 fishermen and others engaged in businesses related to maritime activity, who were directly and indirectly affected by the spill, are waiting for fair compensation.