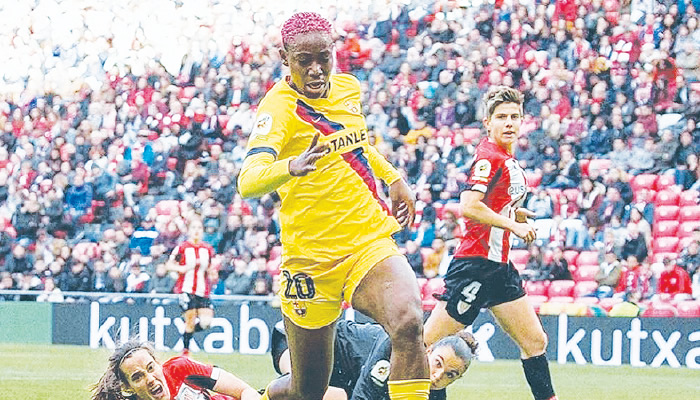 The Spanish champions are on the brink of recording 50 successive league wins, the most in the history of football.

The side triumphed 3-0 against Sporting Club de Huelva last Saturday, with two goals from the Nigerian and another from Mariona Caldentey.

It was their 49th consecutive victory in Liga F since a 4-3 loss to Atlético Madrid in June 2021.

Their next league encounter will be against Levante Las Planas on January 25, and a win would get them to the magic 50 tally.

As reported by Forbes, it would be the first time in history that a football club has won that many successive league matches, with FIFA including the possibility in a list of records that could be broken in 2023.

Barcelona’s record is already far higher than anything officially achieved in men’s football.

SL Benfica hold the record for the most successive league victories across the top men’s flights in European football, racking up 29 wins between 1971 and 1973.

Non-league side Jersey Bulls, located in the Channel Islands, won 36 league matches in a row between 2019 and 2021.

Oshoala was key to Barcelona’s impressive form as they went last season unbeaten, scoring 159 goals and conceding just 11. The Falcons star scored 20 goals to finish as the league’s leading scorer ahead of Geyse (19) and teammates Lieke Martens and Alexia Putellas, who both finished the season with 17 goals apiece.

This season, she has already scored eight goals as her side have already hit the back of the net 56 times and let in just four.