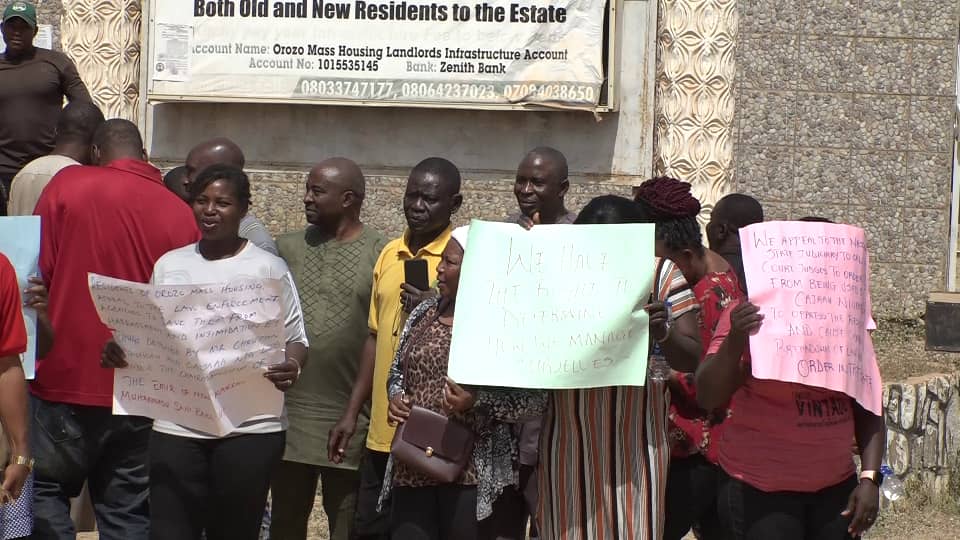 
The Judge of Upper Area Court in New Karu, Nasarawa State Abubarka Abdusallam, has adjourned till February 28, 2023, hearing on the suit filed by Cajaah Nigeria Limited, Promoters of Orozo Mass Housing Estate, against members of the Executive Committee of the Resident Association.

The Defendant counsel Bar. John Edoja Onema told Journalists after the adjournment that the court moved the Hearing to 28 February, 2023 for further mention of the case.

According to him, clients were brought to court based on a direct criminal complaint filed by Cajaah Nigeria Limited, and one of its employees, Mr. Christian Chukwu, who claimed to be the General Manager of the company on the grounds that the Resident Association have refused to allow him take over the entrance gate to the Estate and the security architecture of the Estate.

He explained that the defendants and other residents of the Estate bought individual plots from the Promoters of the Estate, where they built their respective houses, and have been able to manage themselves over the years.

Due to the failure of the promoters to provide the basic infrastructure in the Estate and its refusal to account for the infrastructure money paid by the defendants and other residents of the Estate.

This had subjected residents of the Estate to constant harassment and threat from the General Manager of the comoany Mr. Christian Chukwu, who had tried using thugs to take over the Estate gate and the security architecture of the Estate.

According to him, none of the Directors of the company, including the General Manager who is now fighting for the company lives in the Estate, which calls for concern on why they would want to forcefully secure a place where they do not live or reside.

The General Manager of the company Mr Christian Chukwu explained that the refusal of the Resident Association to allow the company to take over the gate and the security architecture of the Estate led to the court summons on 18 of its Executive Committee Members and security personnels.

He said they were prepared to go on with the trial to prove the innocence of the defendants, who have managed the security in the Estate since 2017, “By the time we go into trial, we should be able to know why we intend to take over the security of the estate and this is why we are in court today“,he said .

One of the residents, Mrs. Taiwo Ogundele said “we are here to support our husbands, we are tired of the constant harassment from the management of Cajaah Nigeria Limited, whose current Managing Director is Muhammadu Sanni Bako III, who is also the Emir of New Karshi, Nasarawa State”.

“Our crime is that we bought land and built our houses in the Estate, which has subjected us to continuous harassment by unknown gunmen, who have continued to invade the Estate at the instance of the General Manager of the company”.

She appealed to the Nasarawa State Government and relevant security agencies to come to their aid and rescue them from the harassment , threat by management of Cajaah Nigeria Limited.