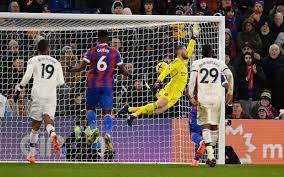 Michael Olise has helped Crystal Palace get a point against Manchester United in their 1-1 draw at Selhurst Park Stadium on Wednesday night.

The midfielder’s late strike in extra-time, 91′, levelled the game against United, who had controlled the lead since the 43rd minute of the first half, after Bruno Fernandes’ fine finish put the Red Devils ahead just before the break.

A relentless Olise scored from a free kick with a left footed shot to the top right corner.

The equalising goal saw United’s dream of replacing defending EPL champions City in the second place on the league table, fade away, as they remain in third with 39 points, having played a game more than City.