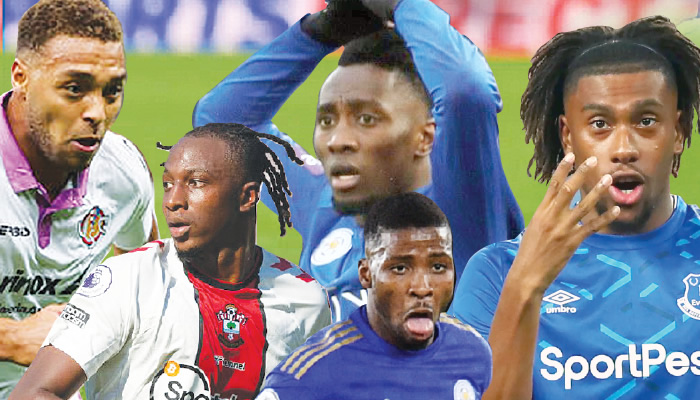 The leagues in Europe are now past midway except in Italy, where the Seria A is one game shy of midpoint, but Nigerian players are already caught in the web of trying to help their teams survive the drop. Abiodun Adewale writes on some of the Nigerians battling for safety

From the safest to the most dangerous, Nigerian players in the English Premier League might be faced with the stark reality of seeing at least one of them go down with their club at the end of the current campaign.

With Nigerians at Nottingham Forest, Leicester City, Everton and Southampton, these clubs might not just be safe any longer for the players as the season enters the second round.

Taiwo Awoniyi and Emmanuel Dennis’ Nottingham Forest have managed to swim out of relegation waters in the EPL. But even at number thirteen on the log, they are five points above the bottom of the table with the likes of Leeds, Leicester, Wolves, Bournemouth, West Ham and Southampton also battling to survive.

With three wins in their last five games, the reds seemed to have taken their destiny into their hands as early as possible, and how many points they will be able to take in the next five against Bournemouth, Leeds, Fulham, Manchester City and West Ham. Sandwiched between those games is a crucial two-legged League Cup semifinal against Manchester United.

In two places behind Forest are Kelechi Iheanacho and Wilfred Ndidi’s Leicester City who are living dangerously with four defeats in their last five games.

It’s been a torrid season for the Nigerians at the King Power Stadium who have been hit by Leicester’s run. Ndidi, especially has gone from that midfield delight to a makeshift center-back and can’t help them from shipping in goals. They have conceded 33 goals this season.

Iheanacho on the other hand must be finding it hard to retain his stock with just one goal and one assist in 14 appearances – with 13 of those coming as a substitute, compared to his last two seasons’ stats when he had 12 goals in 25 appearances. Perhaps his dip in form preceded Leicester’s, as he was only able to score four goals in 26 appearances last season.

Even while he was injured, Alex Iwobi never stopped making headlines for Everton. But as good as the Nigerian is for the Merseyside club, they are back in the same situation they found themselves in last season.

The Toffees needed their penultimate game of last season to move out of the dreaded zone last term, but with just 15 points and without a win in their last game, the odds are stacked against them.

With one goal and five assists already, Iwobi has already surpassed his previous goal contribution for Everton, but it remains to be seen how much he has to do to avoid going down with the Toffees.

When Joe Aribo arrived at Southampton from Rangers on the back of a UEFA Europa Cup second-place finish to a team that finished five points above relegation in the previous season, it was hard to dub his move huge.

He did settle well during pre-season and announced his presence with a superb solo goal against Villareal, but ever since then, the doubts that clouded his move have begun to overshadow him.

It has now gone from bad to worse, as they find themselves dip in the relegation zone with one win in their last five games.

Aribo’s new coach, Nathan Jones might have heaved a sigh of relief with their last win over Everton, but his work for the rest of the season is still cut out, with Aribo seemingly finding favour to get into his starting eleven.

While the Scudetto is in sight for one Nigerian in the Serie A, two other Nigerians are sinking with the newly promoted side, Cremonese.

Cyril Dessers and David Okereke aren’t having life easy in Italy with the club yet to win a game after 18 games in the Serie A. Having only managed seven draws, they sit bottom of the table with just seven points. One of their draws has come in their last five matches and was followed by four other defeats.

With their coach, Massimiliano Alvini, already shown the exit door, it might as well be time for the two Nigerians to find their way of the relegation-threatened side with their stats, lifting them above others.

Both players have three goals and one assist each in 34 appearances between them. Those contributions have made up over half of Cremonese’s goals (13) this season. Good enough for them, but bad for the club.