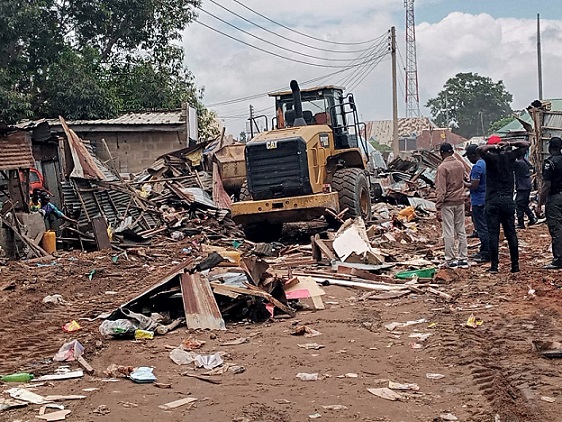 A Senior Advocate of Nigeria, Mr Chukwuma Machukwu-Ume has written a petition to the Inspector General of Police, IGP, complaining that some police officers allegedly supervised and aided the illegal demolition of a shopping complex in Zone 3, Abuja.

Mr Machukwu-Ume expressed displeasure over conduct of the police officers, alleging that they stationed them there and oversee the Zone 3 shopping center’s demolition while a lawsuit involving the landed property was still pending in the FCT High Court and the Appeal Court.

The Federal Capital Development Authority, the Minister of the FCT, Abuja Markets Management Ltd, Abuja Investment Co. Ltd, and Blizzard Nig. Ltd. are named as defendants in the lawsuit.

The petitioner claims that the High Court of the FCT prohibited all defendants from disturbing or interfering with the proprietary interests of the Applicants and the other 33 occupants at the zone 3 shopping complex, Wuse, last year while the case was still pending.

Mr Olugbenga Odubayo also entered its appeal at the Court of Appeal.

The Senior Counsel argued that despite the pendency of these matters, some policemen had on Tuesday, this week, invaded the Shopping Complex and demolished it thereby causing a breakdown of law and order.

Mr Machukwu-Ume therefore pleaded with the IGP to call his men to order and to respect the institution of the Court.