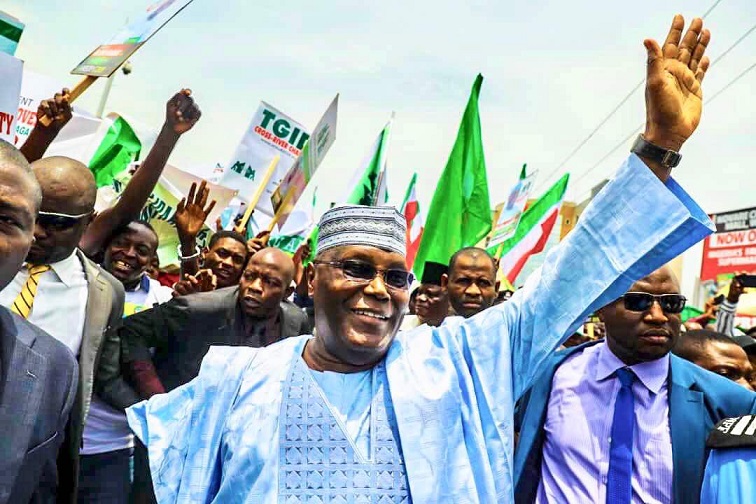 
A former Governor of Ekiti state, Mr Ayodele Fayose and twenty seven candidates of the party for the general election shunned the PDP Mega Presidential rally in Ekiti.

Other prominent members of the party who were absent at the presidential rally include a former governorship candidate, Bisi Kolawole; acting PDP State Chairman, Lanre Omolase; seven of the nine PDP National Assembly candidates and 20 of 26 House of Assembly.

Meanwhile, The Presidential candidate of the Peoples Democratic Party, PDP, Alhaji Atiku Abubakar promised to make the people of Ekiti State and all Nigerians happy if elected president in next month’s election.

The Former Vice President also vowed to reconstruct Ado-Akure Road and harness the human capital resources of the Ekiti people to develop the state and the country in general.

Alhaji Atiku spoke in Ado Ekiti, the Ekiti State capital at the PDP mega presidential rally and expressed pleasure with the acceptance given to him by Ekiti people inspite opposition by some party chieftains.

He said, “What I saw today almost made me shed tears. Before we came to Ekiti, they said we won’t see anybody to receive or identify with us today but you surprised us.

“To stop you from coming to this event, they created artificial scarcity of fuel and made transporters withdraw their services from the road but you broke the challenges to be here enmass.

“I can assure you that, if you vote PDP to power on February 25, we will continue to always make you happy everyday as you have made us happy.

“Ekiti is the centre of intellectual discourse in the country, which is your God-given resources and PDP will make use of this for human capital development. Funds will be made available to youths and women for business enterprise.

“So, vote for PDP and protect your votes on the day of the election.

Alhaji Atiku’s running mate, Governor Ifeanyi Okowa of Delta state expressed gratitude to the PDP leadership and supporters in Ekiti state for standing strong in the face of opposition.

“The disunity in Nigeria today is not the Nigeria of our dreams, industries are packing. PDP as a party firmly rooted in all states of the federation will turn the country around for better for the youths to have hope for the future,” he said.

The party’s national chairman, Dr Iyorchia Ayu said Ekiti people have shown their commitment to the restructuring of the country by coming out for the rally.

“The enemies within and without may stop you from moving today but they can’t stop you from voting for PDP that will rescue Ekiti and Nigeria from tyranny,” he said.

Dr. Ayu presented the flag of the party to Senator Biodun Olujimi who is seeking to represent Ekiti South senatorial district at the Senate and the PDP candidate for Ekiti South federal constituency one, Mr. Henrich Akomolafe.

The Director-General of the PDP  Presidential Campaign Council Governor Aminu Tambuwal and his Akwa Ibom State counterpart, Mr. Udom Emmanuel said the PDP was focused on rescuing the country and ensuring freedom for the people.

“The freedom of movement and association of the people is guaranteed. You must continue on this momentum and deliver the state to the PDP,” Tambuwal said.

For Governor Udom, ‘’Our message is for the youth to look forward to a better future. PDP blueprint is for human capacity development, constructing Ado -Akure Road and industrialising the state. This is a God’s movement no one can stop.”

Other PDP leaders at the event included former vice president Namadi Sambo and Senator Dino Melaye among others.