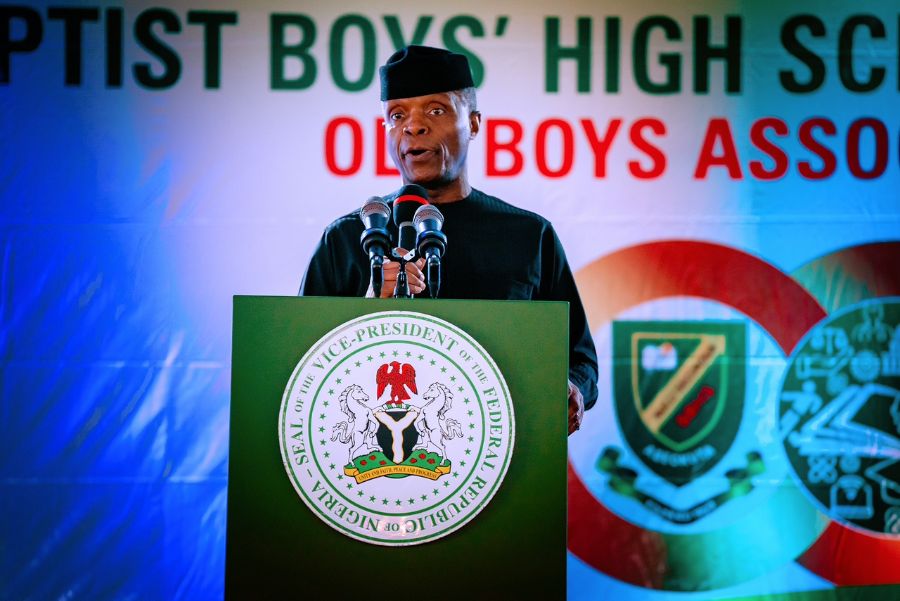 
Vice-President Yemi Osinbajo says Nigeria can produce the highest quality individuals to run the most efficient governments and private institutions, if it teaches the right values, not only in the institutions of learning, but also imbibe national ethics of hard work, honesty, integrity and trustworthiness.

Professor Osinbajo made the remarks on Tuesday in Abeokuta, the Ogun State Capital, during the Centenary Lecture of the Baptist Boys’ High School (BBHS).

Speaking on the topic “Values: the difference between success and failure”, the Vice-President insisted that an “ethical revolution” was necessary for fast-tracking the country’s development towards becoming a great nation.

“There is the need for a national consensus, especially among the political, religious and business elite, in accepting and implementing minimum ethical standards, where we establish a national work ethic, of honesty, hard work, thrift and the deferment of gratification,” the he stressed.

According to the VP, the elite must “reject and ostracize” public officers and persons whose wealth cannot be explained or is clearly from “shady or suspicious sources”.

“Every modern society has had to deal with corruption, and enthrone minimum ethical standards to succeed,” he said.

Referencing the earlier section of the ceremony where the Commemorative Centennial Obelisk with the names of the distinguished centennials inscribed upon it was unveiled, the Vice-President observed that the same values “are what makes individuals, institutions and nations great”.

Noting with examples, countries in Asia and Africa with huge deposits of natural resources and human talent, Professor Osinbajo said: “While geography plays an important role in the success of people and communities, they are not defining features; otherwise, the countries with the largest deposits of mineral wealth would be the most prosperous.”

He congratulated the school’s past and present management “for producing men of outstanding ethical standards over the years”, and thanked the Chairman of Board of Trustees of the BBHS Old Boys’ Association, His Royal Majesty the Alake and paramount ruler of Egbaland, Oba Adedotun Gbadebo, and the National President of the Association, Professor Kayode Oyesiku, for the invitation.

According to a statement by the Senior Special Assistant to the President on Media and Publicity, Office of the Vice-President, Laolu Akande, the VP was accompanied to the event by the Ogun State Governor, Prince Dapo Abiodun.