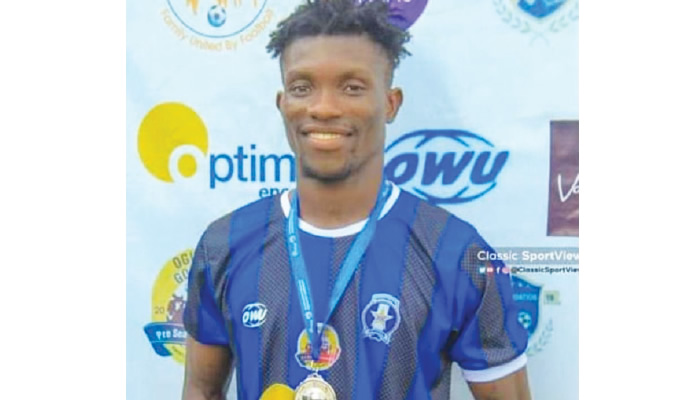 Akpan the next Hazard on the block

Shooting Stars winger, Joshua Akpan, looks set to play an important role for the Oluyole Warriors under new manager Gbenga Ogunbote this season, having begun the campaign in excellent form as the team’s established No. 10.

Ogunbote’s side opened their 2023 Nigerian Professional Football League season with a 3-3 away draw at Plateau United on match day one – a game that marked the debut of the club’s new star Joshua.

Having handed a starting role on his debut for 3SC, it didn’t take the former Dosu Joseph Football club forward long to show his new fans what they can expect in the years to come as he scored the opener for his side just after six minutes.

Playing in a second-striker role off centre-forward Anthony Okachi, Joshua showed his quality with a series of neat touches and interplay that was given rapturous applause by the away fans. He blitzed past two defenders before striking a curling effort from the edge of the box to hand Shooting Stars an early lead in the sixth minute.

Joshua is an attacking midfielder who can also play as a striker as well.

The highly-rated Dosu Joseph Football academy product is seen as a blend of former Nigerian legend Austin Okocha and Real Madrid winger Eden Hazard because of his skills and the way he creates chances for his teammates.

“Joshua is one young player who has been consistent since he joined us,” Ogunbote told PUNCH Sports Extra. We still expect more from him because we believe he still has a lot to learn and offer as he learns the trick of the game.”

“He is very fast and he dribbles well but we still need him to be more clinical going forward.”

However, Joshua’s route to the top has been far from easy. From a difficult upbringing to being denied by Remo Stars last season due to his statue, he has already come through a considerable adversity to reach the top of the game.

Speaking with PUNCH Sports Extra, the former Abia Comet player revealed how he almost sought solace in another profession before legendary goalkeeper Dosu Joseph gave him a chance to prove his worth at his club four years ago.

“My journey into football was a tough because I almost quit the game due to several issues, “Joshua began.

“My parents wanted me to go to school but I wanted to follow my heart decision which was to play football and after several rejections from clubs I finally got a place where I could start of my career in a proper way.

After failing to meet expectation at Remo Stars while he was on trial before the start of last season, Joshua was loaned to Abia Comet to gain first team experience.

The experience in Umuahia proved worthy as he returned back a better player. He joined Shooting Stars on a one week trial in November 2022 and the 18-year-old proved his class to Ogunbote finishing as the top scorer at the recent Optima Energy Gold Cup pre-season tournament.

Joshua scored five goals for 3SC at the tournament. He was also instrumental to the Oluyole Warriors winning the maiden edition of NPFL /Mmobuosi pre-season tournament after they defeated Enyimba at the Mobalaji Johnson.

His performances pushed Ogunbote into sanctioning a move for the winger before the start of the season.

“It was one of the low moments in my career being rejected because of my stature,” Joshua continued.

“It was not that I could not play but the coach wanted another player which I can’t fault.

“But it turned out to be a blessing in disguise as my time at Abia Comets toughened me up and gave me the confidence I have now.

On his idol and ambition for the season, Joshua added, “I hope to help my club (Shooting Stars) surpass their last season feat and I also want to score goals which I believe is one of the best ways to win games.

“I love Eden Hazard. He is my idol. I also love Jay Jay as well. My dream is to become better than they were God willing.”